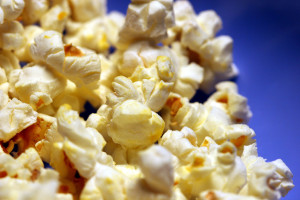 …that were so snazzy people asked to buy them.

Propercorn, a London-based startup that makes healthy and tasty popcorn, has started selling t-shirts and jumpers alongside its snacks after customers asked to buy promotional t-shirts it made for sales people.

Co-founder and CEO Cassandra Stavrou told Business Insider: “From day one, I consciously wanted to position us as a lifestyle brand rather than just a food brand. Something you’d be proud to be seen with.

“Amazingly, people want to know where they can buy our t-shirts. Every snack brand will have to have t-shirts for sampling, but rather than just doing a grey t-shirt with the logo on the front, we did t-shirts that we would like to buy ourselves.

“We got so much interest that we stuck it on the website for people to buy. There aren’t many snack brands that can do that.”

Stavrou, who worked at advertising agency BBH in London prior to setting up the company, brings a design-heavy aesthetic to the company, which does all its branding and advertising in-house. That’s pretty unusual for a company of its size (it has around 40 staff.)

Stavrou says Propercorn has sold “a few hundred” since putting the clothing on sale around six months ago.

Propercorn is one of the UK’s fastest growing companies, with sales of £10 million ($14.2 million) last year.  It has distribution deals with Tesco, Waitrose, and WH Smith.

Hope you have been inspired with this story to start something of your own.  All the best!