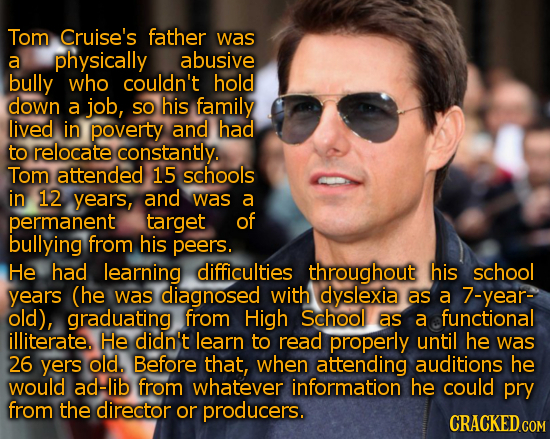 Now you know that if someone attends 15 schools in 12 years, there is definitely some element of disfunctionality in that child’s life and that was exactly how Tom Cruise’s life was, when he was growing up.  Welcome to his world:

Born on July 3, 1962 in Syracuse, New York, he is the third child as well as the only son of Thomas Cruise Maphoter III and Mary Lee Pfeiffer. Together with his three sisters, Lee Anne, Marian, and Cass Mapother, Tom spent his early life residing in various locations, partly due to his father’s occupation as an electrical engineer. The family had wandered through Ottawa; Louisville, Kentucky; and Wayne, New Jersey before they finally settled in Glen Ridge, New Jersey. By this time, his parents had already divorced and Mary Lee remarried a man named Joseph South.

Having attended a dozen of different schools, Tom often encountered difficulties in reading text, thus came to a realization that he had a learning disorder called dyslexia. He then focused his attention on sports during his study at Glen Ridge High School. It was in this period that he got the injury which forced him to leave the school’s wrestling team. Furthermore, it prevented him to pursue any career in sports. Knowing this, he started to look for another field which he could fit in. It appeared that acting was a decent choice, so he decided to take a further look by joining the school’s stage production. Acting apparently turned out to satisfy his need to compete and gain attention while also helped him to cope with his dyslexia as its memorization aspect improved his concentration and motivational skills. Having enjoyed his performance in the student’s musical project of “Guys and Dolls,” he decided to establish a professional acting career.

Being determined to accomplish his dream, Tom went to New York after his high school graduation in 1980. This was the time when he shortened his given name, Thomas Cruise Mapother IV, to a more stylish name of Tom Cruise. In order to support his life, he worked intensely as a bus boy, a porter and a table-cleaner. He afterwards used some of the money to learn drama at the prestigious Neighborhood Playhouse, being taught by both Sanford Meisner and Phil Gushee, the remarkable acting instructors.

Gradually developed his skills, he started to join various auditions, eventually made his way to secure a role in a musical play called “Godspell.” His performance impressed an Italian film director, Franco Zeffirelli, who later offered him a small role in “Endless Love” (1981). Having been signed by Paula Wagner of Creative Artists Agency, he went further playing supporting characters in “Taps” (1981) and “The Outsiders” (1983).

Tom earned his first major role through a comedy film entitled “Losin’ It” (1983). However, it was “Risky Business” (1983) that caused his name began to make sound mainly for his excellent acting and attractive look either which had raised people’s interest. He continued to perform brilliantly in “All the Right Moves” which also came out in the same year. The press started to label him as one of the “Brat Pack,” a group of young actors in their twenties who were predicted to rule the movie industry in early 1980s. This was indeed correct and proper to be addressed toward him as he earned his first nomination at Golden Globe Awards for Best Performance by an Actor in a Motion Picture – Comedy/Musical in 1984.

In 1986, Tom created sensation through his role as Lt. Pete ‘Maverick’ Mitchell in Tony Scott’s “Top Gun.” Becoming a box-office, this particular film brought him to achieve success and gain worldwide popularity.

It doesn’t matter how you start, it matters how you finish, don’t give up on your dream.