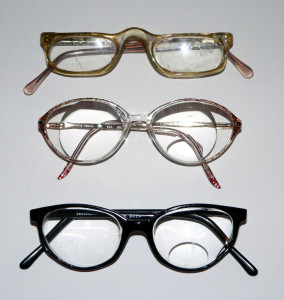 She grew up on a council estate. Now she’s the boss of Specsavers… and three times richer than the Queen.

Dame Mary Perkins is a vision of carefully coiffed silver hair, sensible shoes, neat little legs and a half-price electric blue shift dress — ‘Oh, I do love a Hobbs sale. I’ve got one in purple, too!’

Because 73-year-old Mary, founder of the Specsavers Opticians empire, is Britain’s first self-made female billionaire. She’s worth an estimated £1.6 billion — nearly three times more wealthy than the Queen. But Mary isn’t the sort to splurge — other than in the Hobbs sale or on a new bike and two state-of-the-art new knees that have left her as light and bouncy as a girl.

She works seven days a week, enjoys walking holidays, cycling and reading and sings in her local choral society. (‘We’ve a big concert coming up,’ she says.)

She bikes to work every day from her modest four-bedroom house in Guernsey, eats in the staff canteen and always gives her home a quick ‘once over’ before the cleaner comes.

How brilliantly refreshing. Even better, she is the patron of the NatWest Everywoman Awards, of which the Aphrodite award for mumpreneurs, given to women who have started businesses when their children were 12 or under, is sponsored by the Daily Mail.

And who better to inspire through example than Dame Mary, who, in the flesh, with her soft pink cheeks and constantly fiddling fingers, looks like a cross between Mary Berry and an Embroiderers’ Guild enthusiast.

Unlike many of her fellow billionairesses on the Rich List, Mary and her husband Doug’s fortune is entirely self-made, much of it from a makeshift base on a ping‑pong table in their spare room, while juggling nappy changes, screaming children, nannies, parents’ evenings and the inevitable maternal guilt.

It was an uphill struggle. Not least because she and Doug started their family and first business — a Bristol opticians chain called Bebbington and Perkins — at the same time.

‘I knew nothing about babies and there was no maternity leave back then,’ she says. So when their first daughter, Cathy, was born, she took ten days off then carried on working six days and three evenings a week.

‘It must have been pretty frantic and I had no idea what I was doing,’ she says. ‘But looking back, I didn’t even think about it. I had a twin pushchair, they were on bottles and I had help, so I just got on with it. But it was pretty busy.’

In true Mary style, when she had her son John three years later, she took the new addition in her stride and she and Doug continued to work around the clock.

If she went to a sale convention, the kids went, too. They stuffed envelopes and helped pack glasses for the post.

‘They were always involved. They saw how hard we worked. Now they all work in the company.’

By 1980, they had 23 outlets and sold to a company that was swallowed by Dollond & Aitchison for £2 million (about £8 million today).

‘We couldn’t get our heads round it: we were in our 30s and set for life. We could retire on that. It was an extraordinary amount of money.’

Particularly for this pair. Doug was the son of a policeman; Mary had grown up on a council estate in Bristol.

It was her father, a shop assistant who’d spent four years at night school retraining as an optician, who inspired her to study optometry at Cardiff University.

It nearly didn’t happen. A gifted scientist, Mary signed up for A-Levels in maths, applied maths and physics at her local grammar school.

She was one of only two girls studying physics, but the teacher, Mr Smith, considered that two too many.

‘He refused to teach us and resigned on the spot, so we had to wait weeks for a replacement,’ she says.

She vaguely remembers meeting Doug, also studying optometry, on the first day of term, but vividly recalls his arrival at a party three weeks later.

‘He was the only one with a car! He drove me home from the party and that was that,’ she says. ‘That wasn’t the only reason — I’d hate him to think that — but it helped.’

After they sold their first company, they moved to Guernsey to be closer to Mary’s parents.

‘We tried retirement. We hadn’t intended to open another business,’ she says.

Doug lectured part-time at the local college while Mary volunteered at the Citizens Advice Bureau and did charity work.

It didn’t last. In 1984, Margaret Thatcher loosened the strict regulations around opticians and allowed them to advertise their products and services to the public for the first time. Mary and Doug saw a chance to bring affordable glasses and contact lenses to the masses.

She set up an office in the spare room and the pair honed their vision for a chain of showrooms, under the Specsavers name, where buying glasses was cheap, easy and — thanks to Mary getting fashion designers to banish memories of National Health specs for ever — fun.

They can’t remember who came up with the name, but recall they decided on it during a camping holiday in France. Neither can take credit for the catchphrase ‘Should’ve gone to Spec- savers’, dreamt up by creative director Graham Daldry.

‘It’s great now because it’s free advertising every time someone uses it,’ she says.

‘We get comedians saying it and, gosh, you can’t buy that sort of thing on the BBC. It’s great. We love it.’

The first branch opened in Guernsey in 1984. Today, Specsavers has more than 40 per cent of the UK market plus 1,800 branches in ten countries including Spain, Australia and New Zealand.

In all that time, the company has never closed a store and never had any debt, and Mary and Doug have never considered selling it. Whenever asked, they simply reply: ‘Why would we? We don’t need the money.’

They certainly don’t need it to fuel their lifestyle, which remains almost comically unchanged.   the couple live in the same unpretentious house they bought in 1980.

If Mary does ever commandeer one of the two company jets, she feels so guilty she does a shout-out round the office to see if anyone wants to come, too.

On a recent trip to Glasgow, a PA tagged along to see her poorly father; on another trip to Newcastle, her head of press took his newborn son to meet his granny.   And she dreads the publication of the Rich List each year, finding it acutely embarrassing — though she answers every begging letter she receives afterwards.

While Doug, 74, is the behind-the-scenes workaholic, Mary has always been the company’s driving force — the chatty matriarch with an inner steel.

But there is nothing macho about her leadership style. She admits to being fiercely competitive, particularly at games, but doesn’t shout, scream or appear stressed.   Mary’s attention to detail is legendary. She used to don a wig and visit Specsavers stores as a secret shopper, testing out the customer care. ‘I’m too easily recognised now,’ she says.

Back in Guernsey, she doesn’t even have her own office. We pass her desk on our tour of the open-plan HQ. It is big and messy, surrounded by photos, papers, her leather cycling panniers and the jeans and top she biked to work in — Doug drove in his new bronze metallic 4×4.

‘I don’t always get changed out of them,’ she says.

It takes a particular type of couple to live and work with each other for more than 50 years. Most wouldn’t last a month. But Mary and Doug seem to love it.

She is the public, chatty, warm face — or ‘soul’, as her employees call her — of the business, who knows everyone’s name, birthday and anniversary and is involved in a number of local charities.   It was in recognition of her services to business and the community in Guernsey that she was made a Dame.

As she shows me round the sunny head offices, smiling and waving to people and looking like someone’s very smart granny who’s popped in with some apple cake, she points out the framed ‘long service’ certificates. There are dozens and dozens of them.

There’s even a Specsavers memorial garden to commemorate much-loved employees who have moved to the great opticians in the sky.

Of course, even she has regrets — about working so hard and missing out on time with her children when they were young.   There won’t be a working woman who doesn’t have regrets, she says. ‘Maybe I should have done more, but there was less hovering over children back then. Everyone has those regrets, even now.’

In fact, Mary believes that mumpreneurs who work at home actually have an advantage.

‘Women with young children are incredible multi-taskers and at home with the kids it’s flexi-time — you can work when they’re asleep, work when they’re in bed and there are no overheads. And involve them, so they know what you’re doing.’

She definitely did and it didn’t seem to put them off. John, the youngest, who was dragged along to the most glasses conventions in school holidays, has been managing director since 2007 (‘He could fire me if he wanted to’).   Let’s hope not. She’s still the heart of the company, sits on the board and oversees business development and PR.

Doug, meanwhile, is working on a new five to ten-year plan that he is hoping will revolutionise the industry yet again.   Retirement, it seems, is a dirty word in the Perkins’ house. Even so, the time will come for him and Mary to step aside. Will she recognise it?

‘Probably not,’ she says. ‘But I’ve got a fairly outspoken family. They’ll make no bones about it. Or just contrive something so I couldn’t get into the building.’

Specsavers without Dame Mary would be like Buckingham Palace without the Queen.

For now, though, they’re both in it because they love it. ‘We do have quite a lot of fun here, and I know it sounds trite, but I really only ever wanted people to be able to get good glasses for less.’

And with that, she heads off for her bike — choir practice beckons, followed by a nice dinner out with Doug. Again.

What an inspiration. It’s hard to think of anyone who has better demonstrated not just how to achieve great success, but how to do it while juggling board meetings, nappies, family and somehow manage to keep her children happy, marriage strong, sense of humour intact and sensibly shod feet firmly on the ground.

By Jane Fryer for the Daily Mail   published May 2017

Previous Article WHAT SHOULD YOU DO WHEN AN INTERVIEWER SAYS ‘do you have any questions?’
Next Article 8 Ways to Be a More Confident Person