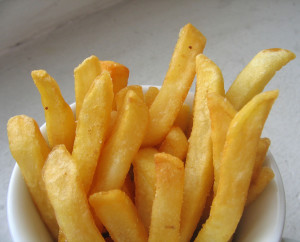 Have you been rejected or disappointed time and time again? Well Colonel Harland Sanders, founder of Kentucky Fried Chicken, did. But he took his failures and didn’t just make lemonade–he made the world a better place.

At age 5 his Father died,” begins the story. “At age 16 he quit school. At age 17 he had already lost four jobs. At age 18 he got married. He joined the army and washed out there. In 1920, he founded a ferry boat company. Later, he tried cashing in his ferry boat business to create a lamp manufacturing company only to find out that another company already sold a better version of his lamp. Poor guy couldn’t catch a break.  At age 20 his wife left him and took their baby. He became a cook in a small cafe.

It wasn’t until age 40 that he began selling chicken dishes in a service station. As he began to advertise his food, an argument with a competitor resulted in a deadly shootout. Four years later, he bought a motel which burned to the ground along with his restaurant. Yet this determined man rebuilt and ran a new motel until World War II forced him to close it down.

Nearly 60-years-old, he would spend days at a restaurant, peddling his chicken technique, cooking for customers, and often sleeping in the back of his car. Sanders sold his first restaurant, and began developing the Kentucky Fried Chicken franchise in earnest.

At age 65 he retired. He felt like a failure & decided to commit suicide. He sat writing his will, but instead, he wrote what he would have accomplished with his life & thought about how good of a cook he was.  So he borrowed $87 fried up some chicken using his recipe, went door to door to sell.

Following the war, he tried to franchise his restaurant. His recipe was rejected 1,009 times before anyone accepted it. Sander’s “secret recipe” was coined “Kentucky Fried Chicken”, and quickly became a hit. However, the booming restaurant was crippled when an interstate opened nearby so Sanders sold it and pursued his dream of spreading KFC franchises & hiring KFC workers all across the country.  At age 88 Colonel Sanders, founder of Kentucky Fried Chicken (KFC) Empire was a billionaire.”

After years of failures and misfortunes, Sanders finally hit it big. KFC expanded internationally and at 73 he sold the company for two million dollars ($15.3 million today). Even today, Sanders remains central in KFC’s branding and his face still appears in their logo. His goatee, white suit and western string tie continue to symbolize delicious country fried chicken all over the world.

Author William Whitworth describes him, “a perfectionist in an imperfect world”. Whitworth recounts how Sanders became a cook as a child in his mother’s regular absence, then shuffled between the life of a farmer, streetcar conductor, soldier, railroad fireman, lawyer, insurance salesman, steamboat operator, secretary, lighting manufacturer, and a number of other jobs, including hotel owner and restaurateur.

If you’re overwhelmed by rejection or discouraged by setbacks, remember the story of Colonel Harland Sanders. Fired from multiple jobs, ruined his legal career, was set back by the Great Depression, fires and World War II, yet still created one of the largest fast food chains in the world. Sanders wouldn’t let anything or anyone defeat him. We should all be more like Colonel Sanders (besides the fighting and getting fired part).