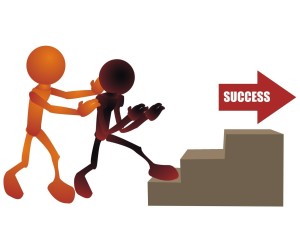 The definition varies, monetarily one person’s million could be another’s $100,000, but are the odds of becoming rich better if one works at a large firm or corporation—or works for oneself?

More people did turn to their own, independent initiative in order to earn a living after unemployment spiked because of the Great Recession of 2007-2009. The number of people who were self-employed in March 2011 and who had been jobless the year prior was 5.5 percent; that’s an increase from March 2006 when that figure was just 3.6 percent, according to a report by the Small Business Administration.

That same report shows that about half of all small businesses fail within the first five years. So what separates the winners from the losers? In some regards, it’s as simple as seeing a great opportunity, seizing it and putting it into action with hard work.

Take Sara Blakely, for example. The woman behind Spanx created the product after cutting the feet off her pantyhose and wearing them underneath a pair of pants to control her body shape. The control top made her look slimmer, but the legs kept rolling up. So she spent her life’s savings, $5,000, to create a prototype that would become Spanx.

Blakely created a huge market for shapewear, revolutionizing the industry in the process. More than a decade later, she’s become the world’s first self-made female billionaire with a net worth of $1 billion, according to Forbes.

Business stories like this aren’t the norm, but they aren’t unheard of either. As the CEO of Camping World and Good Sam, Marcus Lemonis became a multimillionaire and a trailblazer in the recreational vehicle (RV) industry.

Born in Beirut and adopted by a family that owned two car dealerships in Florida, Lemonis, who hosts CNBC Prime’s new reality series “The Profit,” says he definitely did not grow up with a silver spoon in his mouth.

“I would say that my parents, they’re very generous,” he said. “They gave me an education. They took me on vacations. But they were very matter-of-fact that if you want something, don’t come asking us for it, go get it yourself.”

And so he did. Lemonis always knew he wanted to be in business because he likes cash, and after graduating from college, he began working at a car dealership. But it was a conversation with family friend Lee Iacocca that set him on his current path.

Lemonis recalls Iacocca telling him, “Look, you can be in the car business forever; you’re just going to be a number.”

Then Iacocca pointed Lemonis toward the RV industry.

With few barriers for entry, and operating with the thought that people will always want to enjoy the outdoors and camping, Lemonis began buying private RV dealerships, eventually rolling them into the Camping World brand, which had only 30 stores at the time.

In 2010, he combined Camping World with the travel club Good Sam Enterprises. The consolidated company is expected to earn $3 billion in 2013. Under his leadership as chairman and CEO, Camping World is set to expand to 115 locations.

“Today, what we have is the single-largest RV and camping company that the world has ever known. Bigger than any manufacturer, bigger than anything,” Lemonis said.

Remaining successful by being accessible

Lemonis intentionally makes himself accessible to his customers and employees, including his email on posters in stores and in catalogs and magazines.

“It’s been a secret recipe of ours. If the customer feels they can access you, they feel closer to you, and they have an affinity to do business with you,” he said.

Congruently, if employees know customers can easily reach the boss, the associates perform better because they’re being held accountable, he said.

“It’s a very dangerous marketing plan, but it’s one that I’ve had for years and I’ll never get away from it,” Lemonis said. “It’s just the secret.”