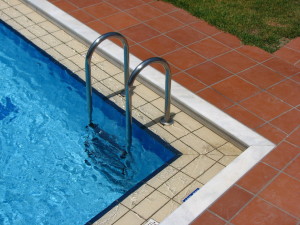 Two years ago, 17-year-old Yusra Mardini fled Damascus in a boat, then literally swam for her life when it began to sink (saving 19 fellow passengers in the process). A year later, she competed in the Rio Olympics.

Yusra Mardini might currently be training twice a day, every day, for two hours, in the run up to the Tokyo Olympics, but she didn’t always like swimming. In fact, she hated it. When she was three years old, her Dad, Ezzat – who later became her coach – would repeatedly push her into the water. Once, twice, three times – until she was gasping for air.

‘My Dad wanted to see what level I was at, whether I could actually swim yet,’ explains the now 19-year-old, speaking at an Under Armour event in Berlin. ‘He threw me in the water and I drowned. Then he got me out and threw me in for a second time and the same thing happened. He kept doing it because he didn’t want to believe I was drowning.’

In the end, Mardini’s Uncle interrupted and pointed out that his brother’s methods might not be the most helpful. But the story, though sweet, takes on an eerie significance when you realise she found herself in an alarmingly similar situation 14 years later– only this time in the middle of the ocean.

Born in the Syrian capital of Damascus, Mardini was a talented swimmer. She was also your typical teenager: seeing friends, going to school.

‘I lead a really normal life, like anyone really,’ she explains.

Then came Syria’s civil war, and as unrest in the country escalated, she would find herself training in pools where the roof had been blown to bits by bombs.

‘All of a sudden we were rushed out of the pool to a safe place. But then you would return to training again like nothing had happened, even though there were shooters outside. Imagine that? We got so used to the war.’

Her hometown became increasingly unstable and Mardini and her sister Sarah eventually left Syria, travelling through Lebanon and Turkey before trying to reach Greece. Their final destination was Mytilene, the capital of Lesbos, a Greek island close to Turkey. The teenagers waited in a forest near the shore for four days, and eventually left at dusk on the fourth night. On board the boat, they felt calmer: finally, they were on their way.

Yet roughly 20 minutes into their journey, the motor stopped.

Most of those on board (meant for six, not 20 people) could not swim. Without thinking – and with no other alternative – Mardini, Sarah and two strong swimmers jumped into the sea to stop their dinghy from capsizing. The sisters swam with the boat in tow for three and a half hours, clinging to a rope dangling from the side. The original trip should have taken a mere 45 minutes.

Did she ever feel close to giving up? ‘No’ comes the firm reply. ‘The worst thing is you can see the island but you can never reach it,’ Mardini explains. ‘You know if you swim you can reach it, but it’s hard. And the waves. They were so high. Even as a good swimmer I wouldn’t dare go out into those waves. I was petrified.’

There was a six-year boy called Mustafa who she and her sister had been playing with in the forest just days earlier. Once on the boat, it was him that kept her going. ‘I tried to be really smiley for him. I didn’t want him to see that I was tired or for him to look down and see the boat sinking.’

The sisters eventually reached the shores of Lesbos. With no belongings – save for a pair of shoes donated by someone on the side of the road – they travelled through Macedonia, Serbia, Hungary and Austria before finally arriving in Germany.

While Mardini still isn’t totally ‘comfortable’ with open water, she isn’t afraid. In fact, she jumped back in after just one week. ‘Maybe it was four days,’ she contradicts herself, before demonstrating a remarkable resilience: ‘you just move on, I think. What else can you do?’

Looking back, the memory doesn’t fill her with fear. She views the experience, though traumatic, as ultimately a positive thing.

‘I feel proud,’ she explains. ‘No one on the boat gave up. It’s something I never want to go through again, and, if I’m truly honest, I wish I hadn’t gone through it, but I’m also thankful– I now know I’m strong enough to do a lot of things in this world. And it’s brought me all the chances I have in my life.’

The very act of swimming – arms slicing through the water, mind focusing on the force needed to lift up, and slightly above, the surface – has also helped the healing process. ‘When I swim, I leave everything I’m thinking about, jump in the water and just think about my goals. It’s the best feeling in the world.’

It somehow seems fitting that Mardini’s choice of stroke – Butterfly – is arguably the hardest to master. Your timing, body position, and speed all need to be perfect in order to swim efficiently. ‘What can I say? I like challenges,’ she laughs.

Now living and training in Berlin, one of Mardini’s first quests was locating the nearest swimming pool.  An Egyptian translator she knew made contact with the Wasserfreunde Spandau 04 swimming club and soon she found a new home to train in.

Previous Article ANNA LEE OF STORM WATCHES, SHARES HER SUCCESS
Next Article A TASTE OF ENTREPRENEURSHIP