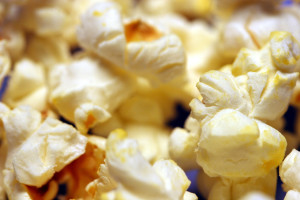 Propercorn has grown from a bedroom idea into a company with sales of £10 million that’s stocked in the likes of Waitrose and Tesco in just 5 years.

Cofounder Cassandra Stavrou, 32, came up with the idea for the company — which makes posh, healthy popcorn — while working at advertising agency BBH in London.

“It was trying to create a snack that genuinely didn’t compromise between the two — it had real impact of flavour, not just a pretend dusting, and still had a low-calorie count.”

Stavrou quit her job in 2009 to try to make her idea into reality and spent two years working bars and other part-time jobs to save money while living at home. She also spent the years trying to build her business — a stressful experience.

Stavrou says: “It got to a point where it was actually quite tough. I was feeling quite flat and alone. I’d been working on my own for a couple of years.

“On the advice of Richard Reed from Innocent Smoothies, who I managed to connect with through friends of friends and who’s very generous with his time, he said you don’t have to do this on your own. You’re really lonely, it’s great to know what your limitations are and partner with someone who can offset some of that.

“Ryan [Kohn, Propercorn co-founder] has been a very good friend for a number of years and was at a point in his career where he was looking for the next challenge. He set up an eco-sustainable property business with his family and was looking for something else. We came together and launched the business in October 2011.”

Propercorn’s first client was Google, where its bags were the fastest selling out of the 48 snacks stocked in the canteen, and it has gone from strength to strength since then.

Last year the company launched Propercorn Platform, an entrepreneurship programme for 16 to 24-year-olds who could submit their own business proposals.

Stavrou says: “We whittled it down to 12 finalists and they got a 2-day workshop at Propercorn where they got to rotate between every department in the business and the winner got a bit of funding and commitment for mentorship.

“We’re not that far from the starting line, we can really relate.”

So what’s the most common piece of advice Stavrou found herself giving all these budding business starters?

“The one thing that I often say to people is the idea is only 10%,” she says. “90% is the execution — building that momentum, getting out there. You spend too much time dithering and perfecting an idea — it’s an idea. It’s an intangible thing that won’t have a P&L [profit and loss] attached to it.”

But she adds: “Also have a really clear vision about what you want to achieve. If you start deviating and try and please everyone you can lose your footing. Be quite clear headed about what your position is, who your customer is, what exactly you’re going after.”